As the race for a slice of the mobile wallet cake hots up in 2014, we take a look at the the major players who are looking to get a foothold in the market.

The wallet solution from MasterCard has been gaining traction in a number of markets since its launch last year. MasterPass is a free digital wallet service enabling safe online shopping by securely storing the customer’s payment and shipping information in one convenient place. The platform connects wallets – providing banks, retailers and other partners with their own branded MasterPass wallet or ability to connect their proprietary wallet to the MasterPass acceptance network.
According to the Global Times, MasterCard is looking to tap into the Chinese market’s increasingly mobile consumer base by launching it’s MasterPass service in China. The country offers the company a wealth of opportunity according to MasterCard’s president of Greater China Ling Hai. Nordea, SEB and Swedbank – three of the leading banks in the Nordics, are now confirmed to launch digital wallets enabled by MasterPass, which shows progress in Europe as well.

V.me by Visa is a pan-European digital wallet service developed by Visa Europe. It removes the need for consumers to enter their card numbers, expiry dates and other personal details every time they make a purchase with an online retailer. The platform is designed to deliver an improved and streamlined online shopping experience. The service will be made available through Visa Europe’s issuing members and consumers will be able to put any card from a major scheme into the wallet, regardless of the card issuer or payment scheme.
The platform is now live in the UK, France, Spain and Poland. The UK’s Nationwide Building Society is joined by leading issuers BPCE and LCL in France, with ING Bank Slaski now in pilot in Poland and multiple pilots also underway in Spain. Other major issuers will launch soon in all four markets, including RBS in the UK, marking a major milestone for the service as it enters the first stage of its pan-European launch. 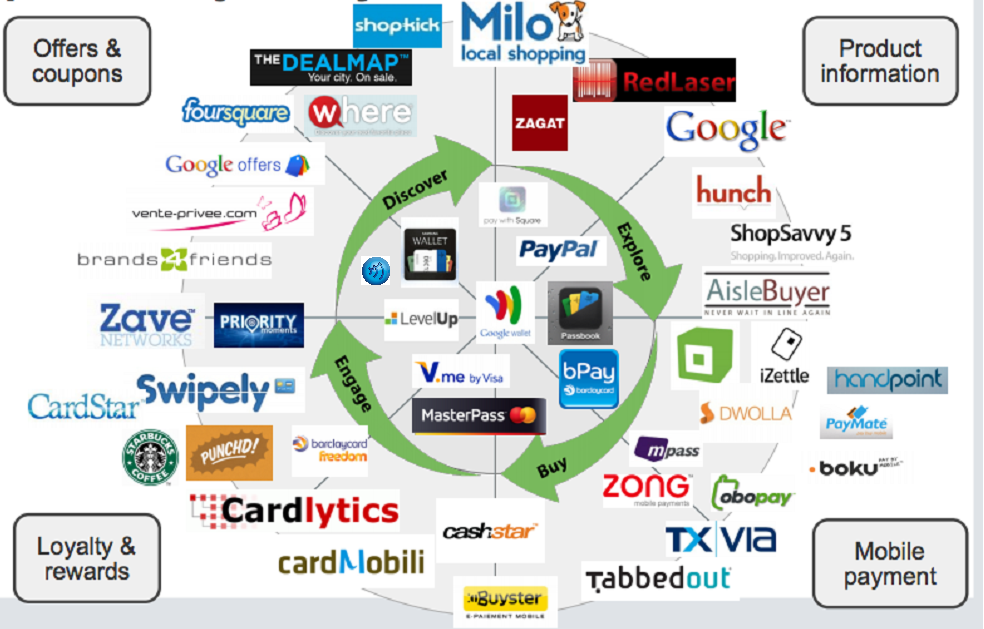 Zapp is aiming to be the UK’s leading mobile payment innovation. The platform will put real-time payments on people’s mobile phones through their existing mobile banking application allowing secure payments to happen between consumers and merchants. Currently Zapp remains a wholly owned, independent, subsidiary of VocaLink with separate board, management and location. VocaLink designs, builds and operates world-class payment systems and ATM switching platforms that in 2012 processed over 10 billion UK payments with a value of over GBP4.5 trillion.
Zapp recently announced major backing from leading banks in the UK. HSBC, first direct, Nationwide, Santander and Metro Bank will roll out Zapp mobile payments to 18 million customers across the UK.

ISIS from AT&T, T-Mobile and Verizon

Through broad participation from the merchants, banks and brands you already know and trust, Isis has convened an industry. Many of the things in your existing wallet or purse – payment cards, loyalty cards, even coupons and offers – can be loaded on the Isis Mobile Wallet.The Wallet app is PIN protected and sensitive data is stored on a special chip in your phone called the Secure Element. The latest version of the Isis Mobile Wallet is now available to consumers for download in the Google Play app store. It’s success could lie in the fact that it is one of few truly independent wallets that is not tied to a specific financial institution, merchant or online marketing scheme.